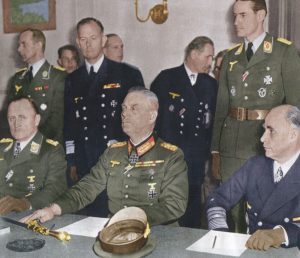 The capitulation of the & rsquo; German army was signed in France in Reims, exactly the 7 May 1945 at 2:41 am. This act recognizes the surrender unconditional surrender the German Reich and fixed the cessation of hostilities for 8 never to 23h01.

The surrender of German troops has taken place the 9 May for Russians.