20 May 1944.
The Normandy landings approaching. The bombings s & rsquo; intensifies, with the aim to slow down and disrupt German movements. The railways are a prime target…
One hundred British bombers aimed Mans rail yards, thirty minutes after this hell l & rsquo; is achieved. Three English aircraft destroyed and a dozen victims among civilians Le Mans.
The same side of the towers, but here c & rsquo; is the Americans who are s & rsquo; care of this important railway junction. L & rsquo; s goal is completely missed, so that the bombs fall on d & rsquo neighborhoods, homes…143 dead.
C & rsquo; is that too war…Many sacrifices unknown to the general freedom. 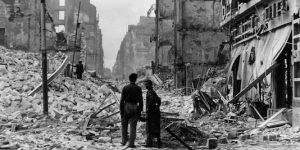